As I’ve mentioned before, I score the games that I watch, almost all of them that I see live (unless I’m at a corporate event or something) and select games that I watch on television.  And, like all fans that “keep book,” I have taken the standard way of keeping score and tweaked it until I found something I like and can understand.  Here’s how I do it. 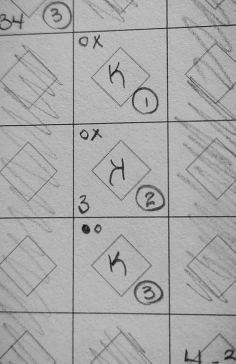 So this is a half inning from the Giants’ opener against the Diamondbacks on Sunday.  The Ks are obvious to anyone who’s scored — normal Ks mean “swinging strike” and the backwards K means called strike.  At the top of the box are the pitches that have been strikes.  Open circles like this – o – are called strikes, x means foul ball and the filled-in dot — • — means a swinging strike.  At the bottom left of each box are the pitches that have been called balls; the number corresponds to the number of the pitch in the at bat.  So in the second box, for example, the batter took a called strike, fouled a pitch off, took the 3rd pitch for a ball, and then got called out on strikes.   The number in the circle is the number of outs in the inning.   Easy!

But, Julia, you might be saying to yourself, what happens when someone gets on base?  No problem!

In this instance, the batter took two called strikes, the 3rd pitch was a ball, then the batter hit a single out to right field, but did not advance past first.  I didn’t always used to put the arrows in, but as I got more comfortable with scoring I found that it was helpful to add in, and didn’t take much time.  This was a pretty straightforward at bat, but the book can get crazy when someone has a good at bat, and then other stuff happens, like here:

In this instance, the batter had a seven pitch at bat, then hit a single to right, and was advanced home by three of his teammates–nos. 35, 13, and 16.  Note that once the hitter gets to two strikes, any further foul balls gets a number corresponding to the pitch number in the at bat.  I picked this up from a baseball blogger whose name I have lost to the sands of time, and I like it because it gives a more accurate picture of how the at bat went than simply stopping at two strikes and ignoring foul balls.

Of course, I also track things besides hits and strike outs, so here’s how the first inning went for the Giants on Opening Day: 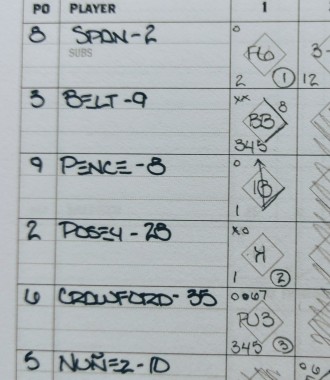 It also shows me, as the game goes on, how it’s going for each team.  Like, for example, I can look at this and tell you that Greinke, the Dbacks pitcher, is having a rough time of it in this first inning and if he doesn’t clean it up, he’s going to be out of there sooner rather than later.  It also looks like Posey is having and off day and Crawford is not, suppositions based on a sample size of 1 that will be borne out by the rest of the game (Posey 0-4, BB; Crawford, 2-5, RBI, 0Ks).

This is the beauty of scoring a game — I can look at my scorebook on that first inning and recreate the game in my mind. Do I remember each of these pitches, each of these pop ups and walks?  No, of course not.  But I do remember a few of them, and I can imagine them all because my book tells me they happened.

Next time: what happens when a team bats around, why I have smileys in my scorebook, and how the hell am I supposed to score replays.

This blog is not associated in any way with Major League Baseball or the Wendelstedt School for Umpires or Baseball Julia's employer. All opinions are those of Baseball Julia alone.
Loading Comments...
Comment
×
%d bloggers like this: