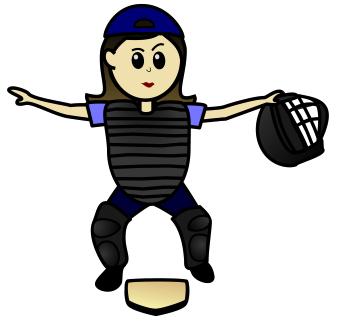 I’m definitely not going to become a major league umpire.

I mean, don’t get me wrong, I’d love to be a major league umpire.  The money is good, the job seems fun, and I’d get to touch a lot of catchers (mmm…catchers…), but it’s not going to happen.  I’m a grown woman with a Real Job and the career path of umpires, much like that of baseball players, involves a lot of toiling in the minor leagues before you get your shot, if you ever do.  Maybe if I’d started loving baseball as a kid, I’d have considered it, but at this point?  Hard pass.

So why go to umpire school?

My first thought for a baseball extracurricular was Fantasy Baseball Camp.  Many teams run one, and you can hang out with retired players and coaches and wear uniforms and play games.  Whee!

Except then I remembered that I am not athletic, like, at all.  I go to the gym and stuff, but the only time I played a team sport outside of gym class (intramural softball) I sucked and hated it. (1) I’m pretty sure that most of the people who go to Fantasy Camp have played and enjoyed playing baseball before, and I haven’t. So it seems like a lot of money to spend a week sucking at something that I’m pretty sure I won’t even like.

One of the things I wish baseball were better at is including women.  They are improving, gradually, but they could do a lot more a lot faster, and I feel like me going to umpire school will be a nudge in the right direction.  Most, if not all, of the other attendees will be dudes, and I think it will be good for them to have the chance to work with a woman in this setting where they normally wouldn’t, and maybe I can make umpire school a little more welcoming for women in general.

There’s no test for umpire school, no minimum set of qualifications, no service time requirement.  They actually prefer that you don’t have too much experience umpiring before you attend, because experience breeds bad habits.  All you have to do to get in is sign up and pay the fee.  Easy peasy.

In Real Life, I am a lawyer.  My nickname at work is The Hammer. (2)  I work regularly in male-dominated environments and have been called every name in the book, both behind my back and to my face.  Big men yelling at me because they are unhappy with my decisions does not bother me.

I’m an oldest child, and like most typical oldest children, I love rules.  I love making them and following them and knowing them better than everyone else.  Getting to be the boss of the rules sounds like a perfect fit for me.

All of these factors plus baseball means that umpire school seems like a good use of my vacation time next year.  And it’s Florida in January–nothing wrong with that.

1. Mostly, I hated it not because I sucked but because there was That Guy on the team who thought he was playing professional ball and threw a fit every time someone screwed up, but the sucking part wasn’t Super Fun, either.

2. True fact: this nickname has arisen spontaneously at two different workplaces. My Real Name doesn’t have anything to do with hammers.

3 thoughts on “Why I’m going to umpire school.”