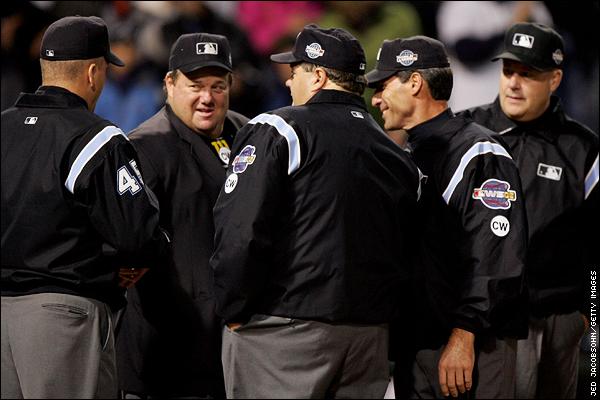 1. Several of them are ex-military.  This makes sense, I suppose.  One of my close friends is a retired Marine, and I can see how she would choose to do something like this.

2.  Several of them have been to umpire school already.  WHAT!?  Cheaters!(2)

3.  So far, I’m the only girl.(3)  Which meant that I had to spend a few minutes figuring out how to introduce myself so that I didn’t come across as too…girly.  I did not use any emoji or emoticons, but I did use one exclamation point at the very end, which means I’m still behind a couple of the male students, who seem very excited.

4.  Several of them are very young.  Like, not yet drinking age young.  I admire their decisiveness about what they want to do with themselves, and I hope it works out for them.  It didn’t for me(4), but that turned out to be for the best, so if they have to transition to something else, I hope they have an easy transition, too.

5.  There’s also a smattering of former players from high school and college.  If you’ve ever paid attention to umpires during a baseball game, you’ll notice that they are often moving counter to the action so that they are in position to see the play.  As someone who has never played baseball, I’m not overwriting any previous programming to get into the right spot, but these former players are, so it will be interesting to see how they counter their training about positioning.

1.  Obviously, I will not be providing identifying details of any of my fellow students without their consent as that is Not Cool.
2. This is my inner Hermione showing.  There’s not really a way to “cheat” in umpire school as near as I can tell.
3. This is an assumption based on given names, which could easily be wrong. I’m also suddenly realizing that my Real Name might not read as female, which is an interesting thought. I did not specifically identify myself as a woman in my introductory post, so if they don’t get it from the name, I guess they’ll find out when I show up in heels at the orientation meet and greet. 🙂
4. Long story short, I quit a PhD program in English literature to go to law school. I miss it sometimes, but I’ve never had a moment of doubt that it was the right decision, especially with all the things going on in education these days.

This blog is not associated in any way with Major League Baseball or the Wendelstedt School for Umpires or Baseball Julia's employer. All opinions are those of Baseball Julia alone.
%d bloggers like this: