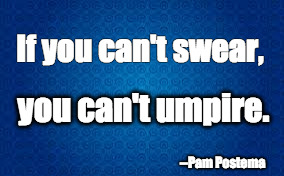 My friend M, who is seriously one of the best gift givers I’ve ever met, got me the autobiography of Pam Postema as a Going to Umpire School present.(1)  Postema, for those of you who are unfamiliar with her, is the female umpire who has gotten the closest to becoming a major league umpire.  She spent many years in Triple AAA, called some spring training games, and was released in 1989.(2)(3)

The book dishes a lot of dirt, which I love, but my favorite parts are the parts where she gives advice about how to survive as an umpire, like the above quote.

Fortunately, as a lawyer, I already have very advanced swearing skills.  True story: a few years ago, we hired a summer intern in the legal department for my company.  As part of his role, he went around talking to all the lawyers for advice and I happened to be last on the list of ten.  So by the time he got to me, he’d already heard all the normal advice about the career path from the other lawyers, and he asks me “what can you tell me that no one else has?”

My response: We swear a lot.  You should practice.

It’s true.  To be clear, I don’t swear at people; that’s a jerk move.  I don’t call people names.  I’m not a yeller.  But swearing?  ALL THE FUCKING TIME.  I’ve heard people say that cursing is cheap and easy and you can get your point across without cursing.  Sure.  Okay.  But I’m gonna.  Because I’ve found that, in my profession, a certain level of vulgarity gets me the information that I need.(4)   There’s always this moment after the first time you swear with a work colleague, this pause in which they consider their options as to how to respond.  In my experience, nine out of ten times, after the pause there is this sigh of relief, as if they are thinking to themselves that they can be honest with me.(5)  Why does it work this way?  I have my suspicions.  More important than why it works is that it does.

In baseball, I suspect it serves a similar function, a means of communicating that the umpire is a member of the club and doesn’t give a fuck if you swear at her, because she’s gonna give it right back.  Players and managers spend a good deal of time trying to work the umpire, according to Pam, and swearing seems to be a way to close down some of those avenues.

I do wish that Postema had talked more about the details of umpire school (I’m going to the same one she went to), although I’m sure that a number of things have changed since then.  I hope not the swearing, though.

(2) Umpiring is much like playing in that, if you don’t advance to the next level after a certain amount of time, the league releases you. 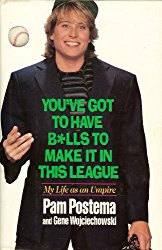 (3)  Long story short, she never made it to the majors because she didn’t have a penis.  Umpiring does not require any special skills in terms of physical ability, but apparently, male genitalia is one of them.  Here’s the cover of her book, which is hilarious:

(4) To quote the Real Slim Shady: “‘Will Smith don’t gotta cuss in his raps to sell records.’ Well, I do. So fuck him and fuck you, too.”

(5) The tenth time is typically one of those people who doesn’t swear, ever, in which case, I’ll dial it back.

2 thoughts on “On swearing.”