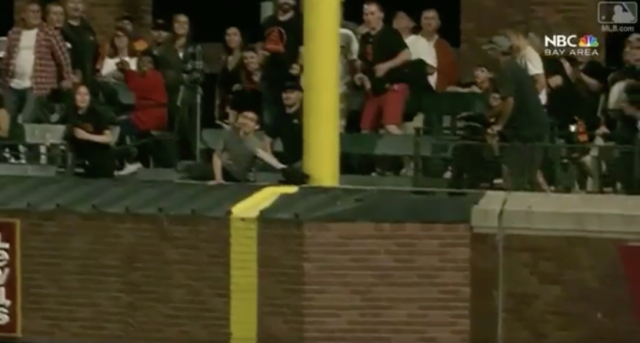 Any umpire who is any good will admit that s/he makes mistakes. If going to umpire school taught me anything, it’s that sometimes the umpire is going to fuck something up, and the best you can hope for is that it’s a minor fuck up, like a missed ball or strike in a low stakes situation, and not a major fuck up, like Jim Joyce’s safe call in the Armando Galarraga’s near-perfect game. [1]

Most of the time, though, these umpire mistakes happen because the plays are happening fast and the umpire on the field misses something.  Unfortunate, but understandable, given all the things an umpire is trying to see at the same time.

But a few days ago, the Giants suffered a bad call by an umpire that is simply inexplicable, because the umpire in question was a replay umpire.

Basically, Giants’ shortstop Brandon Crawford hits a ball to the top of the green roof in right field at AT&T Park.  Before it can hit the roof (or the foul line, more likely), a fan catches it.  At AT&T Park, this is a home run.  Per the ground rules:

Except that the replay umpire decided that wasn’t true and Crawford only hit a double because of fan interference.  This was a major error, and every one in the place knew it.  Why?  Because there’s no physical way for a fan to commit interference in right field at AT&T park.  If the front edge of the roof is the end of the playing field, then a fan would have to reach over the front edge of the roof to interfere, and that’s not physically possible, without the fan taking a major risk with his or her life.  I can’t find specific measurements of the depth of the green roof, but here’s a photo for perspective.  It looks to be at least four feet deep.

And here’s where the fan in question actually caught the ball. 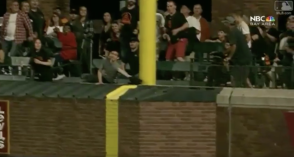 Notice how his hand is basically right up against the foul pole, nowhere near the front edge of the roof?  That means the ball has already crossed out of the playing field, because the plane of the playing field stops about four feet in front of that spot.  There are only two possible correct calls here: a home run or a foul ball. [2]  The umpires on the field got it right, and then were overturned by the replay umpire in New York.

All of this isn’t to say the Giants would have won — they are legit terrible this year for a multitude of different reasons and they still would have been down two runs — or they they are the only victims of these bad calls (the Cardinals suffered one earlier in the same game as a matter of fact), but it’s clear that something has to be done about replay getting the calls wrong.  The whole system was designed to fix things like the Galarraga mistake, to make sure that the calls made on the field were correct, and now we have replay umpires fucking up things that the game umpires get right?  Unacceptable.

~~~
1. In fairness to Joyce, he called what he saw in the moment and stuck by his call. He was wrong, but he didn’t know he was wrong until he saw the replay.(a)

2.  The foul ball call isn’t really supported here, either, as the ball is clearly on the line, which means it’s fair, but at least it’s theoretically possible.  Unlike the fan interference call.